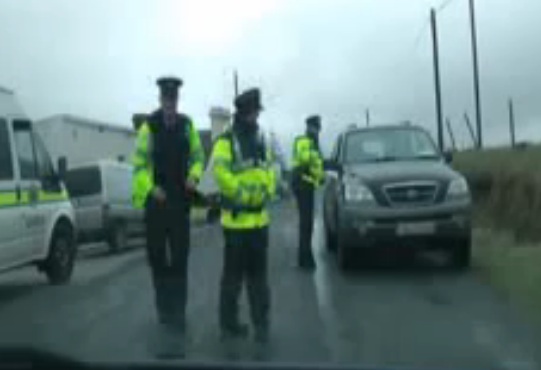 This incident occured on 22nd Feb 2012, as a local man was driving to Ceathrú Thaidhgh where he is working on finishing his new house, stopped by Gardaí at the Shell site. It was in Glengad, road is L1202, about 75 metres from Shell’s Glengad compound.

“This occurred at lunchtime on Ash Wednesday, 22nd February, 2012, on a small local road, L1202 in Glengad, Co Mayo. This is close to Shell’s haulage route and about 70 metres from Shell’s compound in Glengad. This is a few kilometres from Shell’s refinery site at Bellanaboy.
“You can see that two female Gardaí approached the car. When the third Garda, a man, approached the window, he had his baton drawn before he knocked on the window. After he smashed the window, I got out of the car. The Garda told me I was under arrest. I was surrounded by Gardaí with batons drawn.
” ‘Are you refusing to show your licence?’,” the male Garda said. I thought I was in for a beating.
“When I took out my driver’s licence and he looked at it, the atmosphere changed instantly. They all backed away and suddenly I wasn’t under arrest any more. The only conclusion I can draw is that they assumed I was an outside supporter, from the Rossport Solidarity Camp. I assume that when they saw my name and a Rossport address address, that is what changed their approach.
“So, I was left a bleeding hand from the broken window and with a car with a broken window on the side of the road. I phoned Belmullet Garda station to complain and to ask for assistance. They refused to send anyone.
“Following that refusal, I phoned the Garda Ombudsman’s office in Dublin. They said that as there was no complaint to investigate, they would not investigate until a formal complaint was made. They told me I could make a written complaint or visit their office (which is in Dublin).
“So I felt the best thing to do was to release this footage, so that people can see what life is like on the roads here close to Shell’s operations. This kind of thing is happening to varying degrees every day here. People need to know that this is happening, that it could happen to them and that they will receive no protection.”