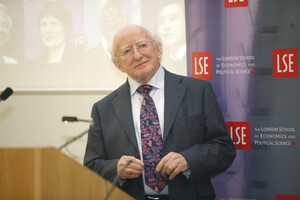 They still call him ‘squee’ behind his back.

The primary concern among Cabinet Ministers relates to the President’s comments about the possibility of summoning the Council of State if the Government proceeds to ratify the fiscal compact treaty by legislation rather than referendum.
There were also some raised eyebrows in the Labour Party at the President expressing opposition to privatisation in the week that the Government decided to sell off stakes in State companies worth €3 billion.

So it has begun.

That speech including podcast here

Plus: Squee And The Irish XV

Is Ireland Ready For A Mad-Eyed President?

Random Dude Makes It To Council Of State