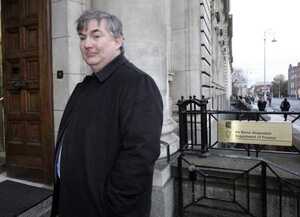 From The public accounts committee meeting on the “Debt Discrepancy In The National Accounts”, November 3, 2011.

Shane Ross: “I will ask just a final question before I depart. Mr. Cardiff is due to head for the European Court of Auditors shortly.”

Ross: “Will Mr. Cardiff assure the committee that he will see this matter sorted before he departs? As he stated, it is his responsibility.”

Cardiff: “Yes. Accounting Officers must take responsibility for issues such as this and see them through. It was to allow this to happen that I stated that I would hope to have the external report on this by the end of the year.”

Ross: “Mr. Cardiff will not depart until this matter has been resolved satisfactorily.”

Cardiff: “My departure is not entirely in my own hands, but I will press hard—–”

Ross: “Mr. Cardiff cannot depart without his own consent.”

Cardiff: I am not sure about how true that is.”

Ross: “Does Mr. Cardiff have something to tell us?”

Cardiff: “No. In a technical legal sense, I am not sure that the Deputy is 100% correct. I will try hard to get this done before I go. Sometimes, a fresh pair of eyes can see things that the existing person cannot.”

Ross: “Mr. Cardiff has responsibility. He is one of the two principal players. It would be wrong if he left the Department of Finance in a shambles, where its systems were not satisfactory and where something such as this could recur. It happened on his watch and he should not go to Europe until this committee, the Department and the Minister are satisfied that this problem has been resolved. Will Mr. Cardiff give us that guarantee?”

Ross: “Mr. Cardiff will just float off and leave the problem here…”

An Interview With Kevin Cardiff