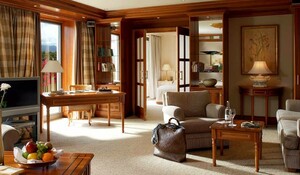 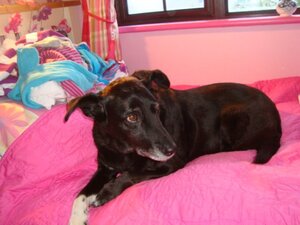 There could be only one winner to our competition for two humans and a dog to stay at pet-friendly The Dunloe, Killarney, Co Kerry (which re-opens on April 6)

Thank you so much, we’re so excited! Jesse is 13 years old, she’s a cross between a Collie and a Labrador. We rescued her from puppy rescue when she was 8 weeks old, she was the last of her litter, nobody wanted her because of her one white paw.
Last year we noticed a lump on her back leg, it can’t be removed because it’s right on her knee and we didn’t want to remove her leg because she’s old, recently it’s gotten really sore and she’s prone to falling.
Jesse is senile as well (this is really annoying but you can’t stay mad at her for long) she barks to go out and when you get up to let her out, she’s forgotten why she was barking, and as soon as you sit down she remembers and starts barking again!

And some of the runners-up.

Tom Red “My dog and I deserve a break because my dog, Jessie, is a rescue dog who was very cruelly treated and having experienced the bad things in life, it’s time for her to experience the good!”

Rory Cronin “My dog and I deserve a break because he is a very old retired guide dog who doesn’t get breakfast in bed often enough. His overworked owners like the sound of the Dunloe also!”

Patrick “My dogs deserve a break because they actually have jobs, work hard Monday to Thursday visiting schools, educating children about good doggy behaviour and could do with a few days in the country to wind down over Easter.”

JakenIzzy “My two boxers deserve it…Jake was rescued from a cruel owner who didn’t feed him and chained him up in a cage (sadface) and Izzy was dumped at the side of the road at approx 10 months  old. Later we found out the reason was she was pregnant with 4 gorgeous puppies!! They are the best dogs in the world and we are so glad we rescued them…they are very easy to please and would love to roam the fields in Kerry for a night or two.”

Darren Healy “My dog deserves a break because he recently lost his son and wife to emigration (they’re gone to France with my mum) and now sits by the doorway every night looking out to see if they will be home! I think a good weekend away in the Dunloe might get his mind off his loss and maybe find himself another furry friend!”

Shannon “My dog and I deserve a break because my mum won’t stop nagging. Its all get your calcium, you’ll fry your eyes on that laptop, less of that junk. She won’t let Jessie sit on the sofa either. And Jessie loves the sofa.”

Do You Have Anyone ‘Abroad’?