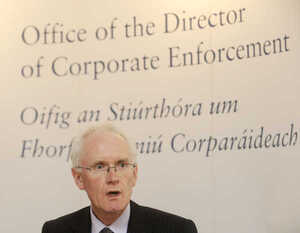 The man spearheading the investigation into Anglo Irish Bank, Paul Appleby (above), secured a bumper €300,000 pension deal by resigning as director of corporate enforcement the day before retiring from the civil service.

He went back to being a principal officer in the civil service for 24 hours before being re-appointed as the acting director for six months.

He was allowed to use his director’s salary of €150,712, rather than a principal officer’s rate of €92,672, to calculate his pension entitlements.

My Work Here Is Done