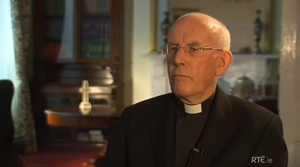 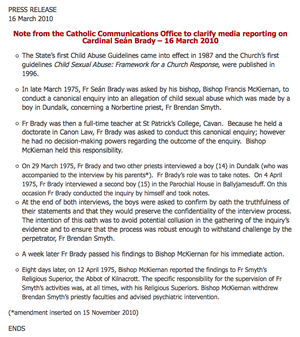 So we were told twice by the communications office (above) on March 16th, 2010, that Fr Brady’s role was “to conduct” this canonical inquiry.

That would fit with Fr Brady’s description in the Catholic Directory for 1975, which described him as a diocesan secretary and advocate.

An advocate represents a client at canon law procedures. He must be skilled in canon law and have a degree in same, which Cardinal Brady has to the highest level. Neither of the other two priests who attended that inquiry with Brendan Boland in 1975 were expert in canon law.

That March 16th, 2010, communications office statement continued: “Fr Brady and two other priests interviewed a boy (14) in Dundalk (who was accompanied to the interview by his parents*).

Brendan Boland told The Irish Times yesterday he was accompanied to the inquiry by his father only and that his father was not allowed be in the room when Brendan was being interviewed.