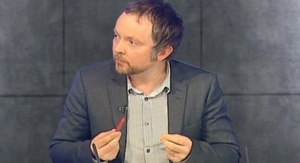 Because the young Europeans must now step up to the plate.

To pretend that public expenditure is the root problem. To stop bombs going off in Dublin. To scupper the annoying remnants of democracy on the elastic voodoo of ‘the structural deficit.’

Vote yes because the treaty is a cushion that will under no circumstances be used to smother you* (*terms and conditions may apply).

Vote yes for that second bailout that we categorically didn’t need.

Vote yes for access to a fund that we can access if we can’t access the bond markets, but for which we will have to borrow billions from the bond markets to pay in our share.

Vote yes to rearrange deckchairs on the iceberg. Vote yes to support Labour’s bid for caviar on the Dail menu.

Yes to a treaty that the Bundestag rejected and the French have declared impossible in its current form.

Vote yes because The Irish Times does fret dreadfully about popular sovereignty. Vote yes because the Shinners will vote no and that 80s vibe still feels nice and comfortable.

Vote yes because Noonan thinks that Ireland being the only country in which this could pass is something to boast about at a business breakfast.

Yes to magical growth plans lashed up on Powerpoint.

Vote yes to pretend the capitalist crisis will go away.