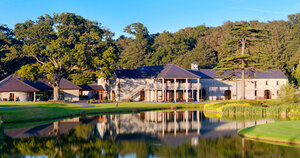 Now NAMA is selling the resort, which hosted the 2001 and 2002 Irish Open tournaments. It can be bought in two lots or in its entirety. One of the lots includes the hotel, formerly known as Fota Island Sheraton, along with its three golf courses and the leisure centre which could fetch €15m. The other lot consists of the 59 unsold lodges which are expected to sell for about €5m to one buyer.

Outside The Cork Working Abroad Expo

Why Is This Happening?