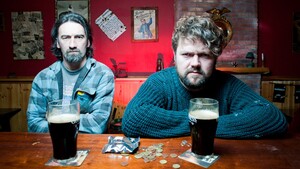 RTÉ is delighted to announce the winner of this year’s StoryLand competition, the Cavan-based comedy drama The Begrudgers. Written by Philip Doherty, directed by Finn Keenan and produced by John McKeown, the drama stars Shane Carroll and Ray Fitzsimons as ‘Nobby’ and ‘Snout’, two bar stool regulars who find their local pub commandeered by a pair of arty new owners. The Begrudgers received 43% of the overall public vote. The full series can be viewed here.

Spire Digital’s Student Teacher, produced by Damon Blake and Rory Walsh and written and directed by Giles Brody, came in at a high-performing second (31% of vote). And Declan Reynold’s comedy Trouble Times Three, directed by Eoin Cleland, was the third in the winning line-up at 26%.

The Smell Of Victory In The Morning