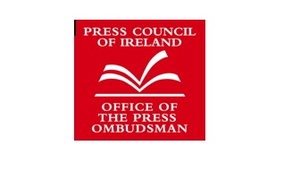 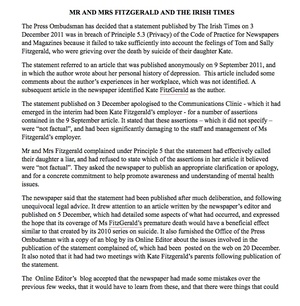 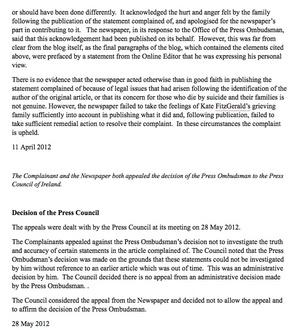 The Press Council decision, released to Tom and Sally Fitzgerald today, which found in their favour.

The matters relate only to the apology given by the Irish Times to The Communications Clinic on December 3, 2011.

The Press Ombudsman, Professor John Horgan, refused to investigate seven matters (see below) relating to the parents’ belief that the apology had labelled Kate a liar.

The denial was made because it concerned Kate’s original article of September 9 which was published beyond the three-month time limit allowed by The Press Council for complaints.

Tom and Sally Fitzgerald regard this refusal as “completely illogical”.

This was the initial complaint by Tom and Sally to the Press Council:

We assert the actions taken by the Irish Times violate the Code of Practice as specified in the following principals:
1.1 False allegation
1.2 Failure to retract
1.3 Failure to apologize or clarify
2.2 Printing conjecture as fact
2.3 Conflict of interest due to overwhelming influence of TCC
3.1 Failure to apply a standard of fairness equally
Principle 4 in its entirety.  The IT ignored Kate’s good name and effectively called her a liar with no foundation.
5.3 The IT was entirely unsympathetic and unfeeling in its dealings with Kate’s family, effectively calling her a liar and refusing to explain why they did so or retracting the statement.
The last article of Kate Fitzgerald’s life was published posthumously and anonymously by the Irish Times on 9 September, 2012.  This opinion piece outlined her treatment at her workplace to her recent hospitalisation for depression. It was a heartfelt plea for understanding and compassion for anyone experiencing depression and hospitalization.  In the article, Kate did not identify her employer.
On discovering that he was the last person to whom Kate had spoken before taking her own life, IT [journalist] Peter Murtagh worked with Kate’s family to write a memorable feature on Kate’s life and death, thereby identifying the author to the public. Published in the IT on 26 November, it became one of the most read articles of the IT in 2011.  Web-based readers deduced that the employer was The Communications Clinic (TCC) leading to an online storm of protest about the behaviour of TCC.  Notwithstanding that the paper had not identified them, TCC complained to the IT, who quickly edited the online article and later deleted it from the IT archives.
On December 3, the day of Kate’s memorial service at DCU, (Pri 5.3) the Irish Times published an apology to TCC alleging that some of what Kate had written was “not factual”. Kate’s family asked the IT to tell them what in the article was “not factual”, but despite two meetings with Kate’s parents, Irish Times editor, Kevin O’Sullivan could not produce a single example of a non-truth. (Pr 1.1) Nonetheless, he refused to either apologize or retract his allegation. (Pr 1.2 & 1.3)
The IT supplied no evidence that what Kate had written was non-factual.(Pr 2.2) Their apology to TCC represents capitulation to an influential group of people (Pri 2.3). In stark comparison to the huge influence of TCC who have influence over political parties, RTE, and the Catholic Church, Kate Fitzgerald is dead and cannot defend her words. (Pr 3.1).
Kate wrote an opinion piece in good faith and submitted it to a paper she believed to be ethical.  Based on our conversations with Kate in weeks prior to her death, and discussions with other employees of TCC, we have every reason to believe her article.  By branding her last words as “non-factual”, the IT violated the entirety of principle 4, and as the “Paper of Record” for Ireland, they diminished the stature of Irish journalism.  We appeal to the Ombudsman to set this right.

And this is the response from the Press Council.

Dear Mr and Mrs Fitzgerald.
This Office has now carefully considered all of the correspondence that you submitted in relation to your wish to make a complaint about the apology published by The Irish Times on 3 December last.
I note that your complaint about the apology published on 3 December centres around the fact that the apology alleged that   “significant assertions”   in the article by your late daughter Kate, published on 9 September,  were  “not factual”.
I very much regret that this Office has a difficulty in considering part of your complaint, because the original article, to which the apology relates,  was published on 9 September last. Section 24.1 (a) of the Memorandum and Articles of  Association of the Press Council of Ireland state that this Office can consider a complaint  only “if it concerns a matter that has been published within the past three months”.    As this provision is contained in the Memorandum and Articles of Association establishing this Office and the Press Council itself, this Office has no leeway in the matter.  In these circumstances, I  regret that the issue of the  factuality or otherwise of the article published on 9 September cannot be considered by this Office as the article concerned is out of date.   For this reason, a complaint about the elements of the apology under Principles 1, 2, 3  and 4 of the Code of Practice for Newspapers and Magazines are out of time.
I very much regret that this is the situation.  However, this Office is not precluded from considering your complaint about the apology published on 3 December under Principle 5.3 of the Code of Practice, insofar as this would not involve any consideration of the original article.  Principle 5.3 of the Code states:
“Sympathy and discretion must be shown at all times in seeking information in situations of personal grief or shock.  In publishing such information, the feelings
of grieving families should be taken into account.  This should not be interpreted as restricting the right to report judicial proceedings.”
If it is acceptable to you for this Office to proceed with a complaint under Principle 5.3 of the Code, we will contact the editor of The Irish Times with a view to resolving your complaint speedily and effectively through our conciliation process.   If it is not possible to resolve the matter through our conciliation process, your complaint will be referred to the Press Ombudsman for his consideration. I look forward to hearing from you. Please do not hesitate to contact me if you would like to discuss the matter with me.