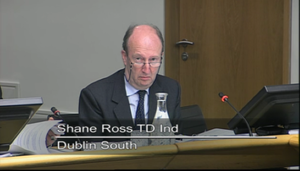 Shane Ross TD (above) said that the selection of the auditors of the banks was of critical importance and expressed concern that bank boards stuck to their auditors like clams and paid them huge sums of money.

John Moran said he was happy to raise the issue with the banks but that in his opinion that it was an issue for the banks themselves.

Mr. Moran said the fact that the €3.6 billion error in government debt computations that continued to exist over such a long period was wholly regrettable. He said the creation of a finance and risk office within the Department of Finance was designed to prevent a reoccurrence of such an error throughout the department as a whole.