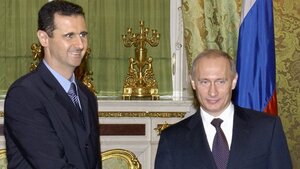 Russia has indicated that it will no longer stand in the way of the departure of Syria’s President Bashar al-Assad if that is what Syrians want. The comments by Russian foreign minister Sergey Lavrov come despite Russia’s insistence that there should be no external intervention in the escalating Syrian conflict. While the Russian remarks remain obscure on how that political transition might be achieved, they suggest a weakening of Moscow’s backing for Assad in the midst of growing international calls for his departure.