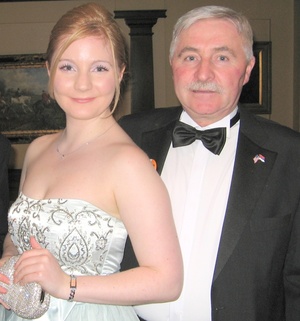 Tom Fitzgerald (above with his daughter Kate at the Irish American President Obama Inauguration ball in Washington DC in January, 2009) writes:

Thank you so much for the support you have shown over the past months during the controversy surrounding Kate’s death. I’ve been very impressed by the intelligent, and thoughtful tone of the discussion.

Unfortunately, this is very far from over.

As you can understand, I’m not in a position to discuss the Garda investigation.  However, I would like to spark a wider discussion on the role of the Press Ombudsman.

I have limited legal training, but a lot of writing experience. I cannot find a legal or logical reason as to why the Press Ombudsman threw out 7 of the 8 items in our complaint, because they allegedly fell outside of his time limit of 90 days.

He [press ombudsman] claimed that he would have to refer back to the September article by Kate, and that this article was outside the time limit.

First, we made no complaint about the September article. The total complaint (text here) was about the December 3 apology to The Communications Clinic..

Second, the September article was still on the IT website up until November 27.

Third, the September article was modified on the website on the 28th of November, which I believe brought it back into the mix as a newly published article and thus back into the 90 day time-frame.

I understand from reading some of the input that there are a number of people on Broadsheet with legal expertise. Can you please provide some feedback on the validity, or lack thereof, of throwing out 7 or the 8 elements of our complaint to the Press Ombudsman.

The Irish Times behaviour on this has caused great pain to our family, as it publicly dishonoured Kate’s memory and cast a deep shadow on her last words .

To this day, Kevin O’Sullivan (Irish Times editor) has refused to tell us what was “not factual” in Kate’s article.

In fact, after discovering the identity of one of the key sources of the Irish Times’ information (that stated Kate had no problems working at The Communications Clinic), we provided the IT with absolute proof, that this same source had  stated the opposite in a formal statement.

The Press Ombudsman was also made aware of this.