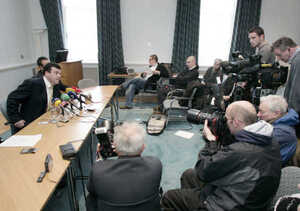 The late Brian Lenihan at a press conference announcing the bank bailout in September 2008.

No official file exists on the decision taken by the former Fianna Fail-led government on the night of the €440bn state bank guarantee — the historic move that tied the banks’ debts to the taxpayer. Taoiseach Enda Kenny intriguingly claimed yesterday that the file may have been “shredded”.

Despite making the disclosure, Mr Kenny was unable to back up this startling claim and no garda investigation has been initiated.