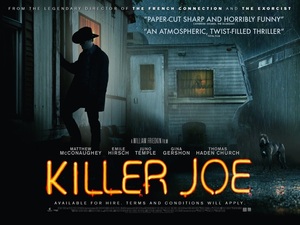 1. Anybody order some deep fried southern gothic, with extra ham?

2. Any film directed by William Friedkin will automatically come
attached with the tagline ‘From the director of The French Connection
and The Exorcist’. Fair enough.

4. Killer Joe is being released unrated in the US, due to nasty business
involving a chicken drumstick.