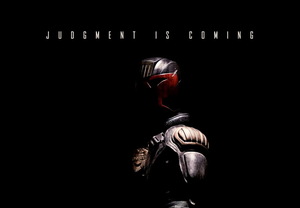 1. Judge Dredd is a character from classic Brit sci-fi comic 2000AD. Sly Stallone starred as Dredd back in 1995. It didn’t go well.

2. This second bash is more faithful to the original comics. Dredd don’t take his helmet off for no-one.

3. Behind the helmet? Kiwi bad-ass Karl Urban, AKA Éomer from Lord Of The Rings and Bones McCoy from the Star Trek re-boot.

4. The bad guy is played by Lena Headey with some heavy scarring make up so you may not realise she also plays Cersei Lannister in Game of Thrones.

5. It’s written by Alex Garland, and directed by Pete Travis, who did Omagh.

6. Irish connection: hot ginger Domhnall Gleeson is in it somewhere.