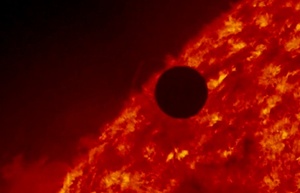 The Solar Dynamics Observatory, is the most advanced spacecraft ever to study the sun’s atmosphere and magnetic field. It sends back a terabyte of data every day – including images eight times higher in resolution than HDTV.

On June 5 2012, SDO collected images of the rarest predictable solar event–the transit of Venus across the face of the sun.  This event happens in pairs eight years apart that are separated from each other by 105 or 121 years.  The last transit was in 2004 and the next will not happen until 2117.

The videos and images displayed here are constructed from several wavelengths of extreme ultraviolet light and a portion of the visible spectrum.  The red colored sun is the 304 angstrom ultraviolet, the golden colored sun is 171 angstrom, the magenta sun is 1700 angstrom, and the orange sun is filtered visible light.  304 and 171 show the atmosphere of the sun, which does not appear in the visible part of the spectrum.

Full screen and 720p is the best way to watch this.