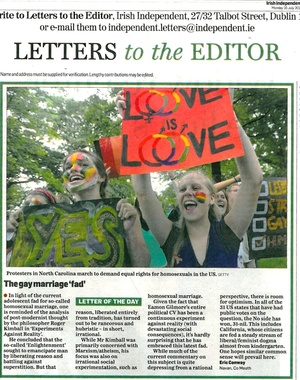 This same man has previously called for atheism to be labelled a thought crime.  asserted that ‘Gulags, death camps and killing fields were integral to atheism’ and decried evolution.
Obviously I understand the value of newspapers printing opposing views in letters and Op-Ed pieces, but surely awarding ‘letter of the day’ to this kind of letter that offers no facts or reasoning behind it’s hate-filled prose implies that the publication is giving merit and validation to his viewpoint?