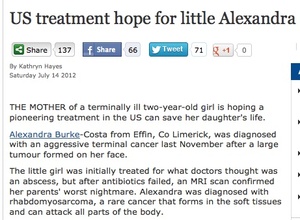 Whenever alternative medicine is mentioned, patient choice is championed, and the frequent refrain of “what’s the harm?” is heard; people with no hope are being given a second chance at life by “pioneering” treatments with unheard of cure rates, and anyone who questions the treatment is decried as cruel and heartless for stealing hope.

Hardly a week goes by without an article about a fundraising campaign for some alternative clinic, and this week is no exception – on Saturday July 14, both The Irish Times and The Irish Independent carried the story of Alexandra Burke-Costa from Effin, Co Limerick.

Her family are trying to raise money to visit a controversial clinic in Houston, Texas, run by Stanislaw Burzynski. The clinic purports to provide “targeted gene therapy” and uses antineoplastons, an unproven substance derived from human urine, to allegedly cure numerous forms of cancer with virtually no side-effects, and far fewer damaging effects than the standard treatments of chemotherapy and radiotherapy. The clinic has grown in popularity and become something of a mecca to people with incurable cancer, and this is in large part due to irresponsible reporting on the part of the media.

The Irish Times calls Burzynski’s treatment “advanced”, and the Irish Independent refers to it as “pioneering”, but neither report even pays lip service to the controversy surrounding the treatment, its efficacy, and the largely inflated cost, and if there is one thing that is certain about treatment at the Burzynski clinic, it is that it is controversial.

It has been approximately 45 years since Burzynski discovered antineoplastons, approximately 35 years since he began treating patients with them, and approximately 24 years since that first presentation in which he discussed the clinical results of his treatment. This is an extremely long time to be testing a treatment without publishing significant results, moving further through the trial process, or reaching a stage where the product can be marketed to the general public (given that the FDA estimates that it takes approximately 8.5 years for a new cancer drug to reach the market, from inception, through trialling, and to delivery).

In short, there have been some bold claims made about antineoplastons, without any significant clinical research to support them. In addition to his antineoplaston therapy, the “targeted gene therapy” mentioned has, in practice, been anything but targeted. Patient blogs talk about Affinitor and Votrient (both chemotheraputic drugs) being used off-label, and numerous comments scattered across the web indicate a seemingly random pattern of prescribing chemotheraputic drugs (to be acquired from his on-site pharmacy, at highly inflated cost).

With such a question mark hanging over this treatment, it seems odd that so many outlets would report favourably on it (or shy away from mentioning the controversy), and yet each time Burzynski’s treatment is mentioned in the media, it is inevitably described as pioneering, advanced, unique, and at worst, experimental. These articles (and countless others like them) fail to mention the fact that the treatment is unproven, and instead focus only on the patients, before encouraging people to donate, but would people donate if they knew more about the treatment, its chances, and the often questionable actions of the clinic’s founder? Would patients still seek treatment if these articles did more to highlight the controversial aspects of the treatment?

People say that patients don’t care about data, journals, and technical data, and that may be true, but even if it is, patients do deserve the truth about their treatment, their prognosis, and everything associated with it. With scientific papers often seen as dry and inaccessible (both because of the content, and because of the expensive paid access required to read them), it can be easier to find that truth in a heart-warming cure story than in the data points on a graph, and this is why accurate reporting about alternative treatment providers is so important. A patient should absolutely have the right to choose alternative medicine over conventional treatment, but it is a poorly informed choice if it is based on infomercials, advertising websites, and unproven claims, and patients deserve accurate information to help them make their choice.

Each uncritical article published about clinics like the Burzynski clinic amounts to free advertising for a treatment which is at best, as yet unproven, and at worst, much more damaging than it is claimed. Though articles about individual patients and families must tread a careful line between criticism of the clinic and the feelings of those involved, the current standard of reporting on these clinics ultimately helps no one. It’s time to stop hiding the controversy, and sweeping it under the carpet. Patients deserve information, not infomercials.