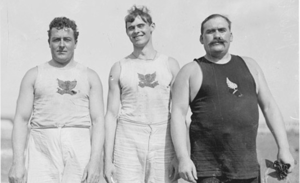 Given the general mistrust of foreigners in the early 20th century, it’s a little more surprising that many of these beloved discus and hammer throwers and shot-putters were born in Ireland. These men, known as the Irish Whales, were at once American heroes and exotic curiosities—monumental figures who appeared just on the cusp of broader Irish acceptance in America.

…In 1898, a group of recent immigrants formed the amateur Irish-American Athletic Club in Queens, New York. The club, which over the years included Italians, Jews, and

…It didn’t take long for IAAC members to crack the U.S. Olympics team. By 1908, the Irishmen were already fixtures on the American squad. Most contemporary U.S. coverage of that year’s games focused on American heroism, English perfidy, or both. Allegations of host-country cheating ran rampant: English officials tampered with the marathon finish; the discuses weren’t regulation weight; the British tug-of-war team gained an advantage with their metal-rimmed boots.

…Three years after the formation of Sinn Fein, less than a decade before the Easter Rising, this was the perfect moment for Irish-Americans to find common cause with their adopted country in hating the English.

One highly believable but probably apocryphal tale has IAAC member and discus gold medalist Martin Sheridan egging on U.S. flag-bearer Ralph Rose in his famous refusal to lower the American flag to King Edward VII at the opening ceremony, saying, “This flag dips to no earthly king.”

When it came to the controversially heavy boots of the English tug-of-war team, [Martin] Sheridan, in his column for the New York Evening World, quipped, “The Englishmen had to waddle out on the field like a lot of County Mayo ganders going down to the public pond for a swim.” 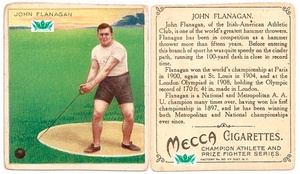 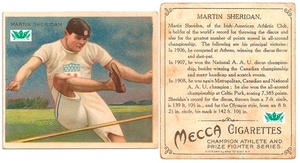 Slideshow: Would You Like An Irish-American Athlete With Your Cigarette?