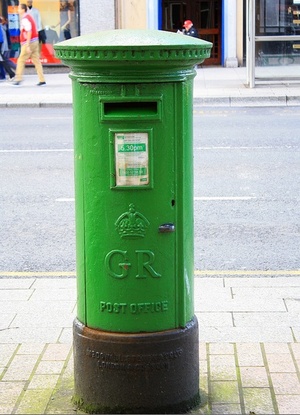 The post box on Lower George’s Street [Dublin] has been replaced with a modern one. This box dated from King George’s time, probably the very person the street was named for, which could be easily discerned from the large letters GR, George Rex, that were part of the box door casting…
…Above where this post box sat are the remnants of the supports for the overhead cables of the old electric tramway, now still serving the public as a bracket for a Garda Síochána CCTV camera.
The architectural heritage of our streets should be cherished for enriching our lives.
In a letter to your paper Barry Whelan, An Post’s director of communications and corporate affairs, gives many reasons for box replacement.
Unfortunately the only reason that appears to fit this act is vandalism, with An Post being the vandal.

Previously: “We Are Proud Of Our Old-Style Post Boxes”

It Stood For A Year