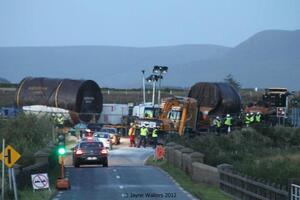 From The Rossport Solidarity Camp:

This morning at about 4am hundreds of Gardaí and Shell private security (IRMS) mobilised to Glenamoy crossroads where sections of Shell’s tunnel boring machine has been stuck on a jack-knifed lorry for the last number of days.

Since then convoys of lorries have been hauling stone from a stock pile inside the refinery to the site, dumping it into the field below the cab of the jack- knifed lorry. It is thought that they need better foundations than the bog road and fields in order to use a crane big enough to lift the weight of the lorry and the TBM.

Since this morning the area is under police occupation on a scale similar to that during the Solitaire pipelaying operation in 2008 and 2009.

With no warning or notices the North coast road between Glenamoy and Ballinaboy has been closed, there are Gardaí posted every 50 metres along this new haulage route and freedom of movement has been seriously curtailed. Anyone who wishes to come down to document the occupation and harassment of the community would be most welcome.

Glenamoy locals have noticed the road subsiding under all the weight – this will become worse if they get a crane in there. The desperation of behalf of Shell and the Gardaí mirrors what is at stake – the Corrib project is literally at a crossroads and could be slipping into the bog that Shell have been fighting against for all these years.

The camp is open and if you ever thought about coming up here then now is the time. The resistance over the last few days has been inspiring – starting with the protest presence Dublin port, the tracking across country and the protests and blockades in Mayo. Would the convoy drivers have decided to head down a bog road to turn for a better angle on the last corner if there had been no pressure?

Besides protest actions to stop the delivery of the TBM to the tunneling site (if they manage to move it at all) there is all the other work needed to keep the show on the road (and the TBM stuck on it) – housekeeping, reporting, media work, tea, food, transport and lots more.

If you can’t come please spread the word, and we’ll try keep you up to date as things happen.

All the best
Everyone at the Rossport Solidarity Camp