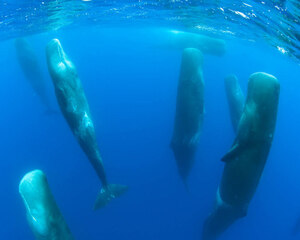 A team led by Luke Rendell at the University of St Andrew’s, UK, were monitoring calls and behaviour in sperm whales (Physeter macrocephalus) off the northern Chile coast when they accidentally drifted into the middle of a pod of whales hanging vertically in the water, their noses poking out of the surface. At least two of the whales were facing the boat, but not a single animal responded.

“It was actually pretty scary. The boat had drifted into the group with its engine off [while] I was below decks making acoustic recordings,” says Rendell. “Once I saw the situation I decided the best thing to do was to try and sail our way out of the group rather than turn the engine on and have them all react.”