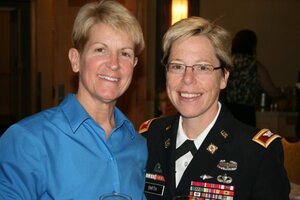 An Army officer being promoted to brigadier general openly acknowledged her homosexuality on Friday by having her wife pin her star to her uniform, thus becoming the first openly gay officer of flag rank in the United States military. The officer, Brig. Gen. Tammy S. Smith, 49, a 26-year veteran of the Army, was promoted in a ceremony at the women’s memorial at Arlington National Cemetery. The star was affixed by Tracey Hepner, who was a co-founder last year of the Military Partners and Families Coalition.