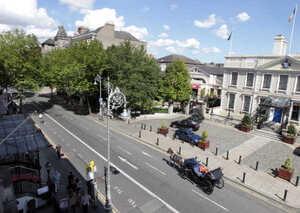 Prepare to stand in Dawson Street for three hours watching this:.

While the format of the event has yet to be finalised, it is expected that they will be interviewed on stage by a master of ceremonies, who is expected to be from RTÉ. There will also be “some light entertainment,” the city council said, although no acts have been confirmed. Footage from Ireland’s participation in the Games will be shown on a big screen. The lord mayor will bring the event to a close at 2pm, the council said. “The council is planning a lively and exciting public event,” a spokesman said.

Reception For Athletes To Be Held At Mansion House (Olivia Kelly, Irish Times)

They Braved The Wind And Rain