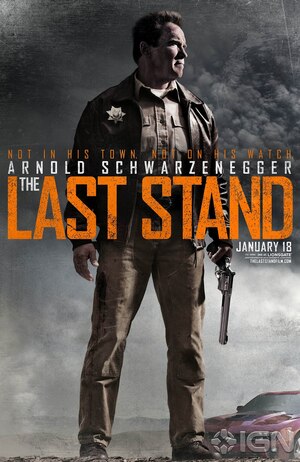 1. We missed you Arnold Schwarzenegger. He’s in The Expendables 2 (2012), which is out now, and culminates in an extended scene of airport carnage involving Arnold, Sly Stallone, Bruce Willis and Chuck Norris, that puts the Rwandan genocide to shame.

2. The Last Stand is 64 year-old Arnold’s first starring vehicle since he left political office, and his first leading role since Terminator 3: Rise Of The Machines (2003). He’s got a bit of a pumped-up Clint Eastwood vibe about him these days.

3. It’s directed by Kim Jee-Woon, the Korean madman behind the stunning I Saw The Devil (2010), A Tale Of Two Sisters (2003) and The Good, The Bad, The Weird (2008). In the same way Hollywood snapped up all the cool Hong-Kong directors twenty years ago, they’ve belatedly twigged that New Korean Cinema is where it’s at.