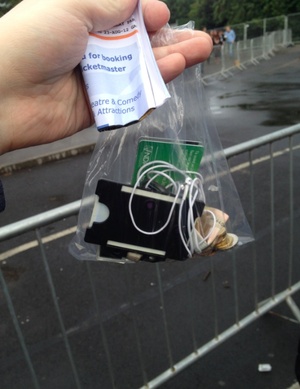 Just a note on security at the Marlay Park gigs.I was at the Kasabian/Noel Gallagher gig last night and just thought that the security was OTT. We had to queue 3 times to get to the queue to enter the event. At one of the queues we were given a plastic bag (above) to put ‘anything you have in your pockets’ in. Then we were patted down thoroughly by one guy and sent over to the next guy who gave us the once over with a metal detector. After the sound came back on (power went down for a while), in the pit there were security guys going round in groups of 8-10 telling people to ‘stop jumping’ which was hilarious to watch. But hey, at least nobody was stabbed!! The system works!

A Full Body, You Say?

Tell The Cats To Chill