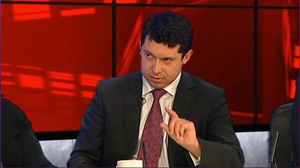 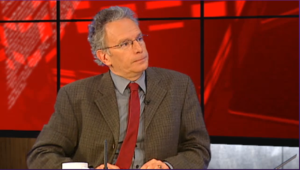 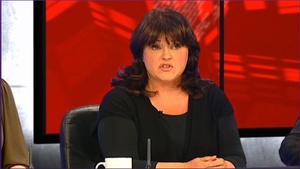 It got pretty dark.

Fintan O’Toole: “Ronan Mullen, if we start with that European Court for Human Rights’ ruling last year which is why the Government is going to have to deal with this situation one way or the other. It was a very narrow ruling and actually very precise. And what it found was, in the case of one woman, she had cancer, she inadvertently became pregnant, she was having treatment. And no-one in Ireland could tell her, with any kind of clarity, what the legal situation was as to whether or not she could have an abortion to save her life. Now that was the unanimous ruling. As a matter of fact, of the European court. I mean isn’t that, in itself, just an inexcusable barbarity in a 21st century democracy?”

Senator Ronan Mullen: “No, I don’t see it the way you’ve just presented it at all. And in fact right from the beginning there, there in the break even before the programme, you said that the court had ruled that we must now legislate. Even that’s inaccurate actually Fintan. We’ve got..One of the difficulties about this issue I think is that some people in the media have tended to see in this issue what they’ve wanted to see and they’ve used it on occasions to justify maybe their own prejudices about the state of Ireland’s abortion laws. Some of the facts around the C case are not clear. For example whether the person in question even saw an oncologist in Ireland, OK? So we need to be very clear.”

O’Toole: “What’s absolutely clear. Let’s just quote from it then. You’re saying I’m being inaccurate about this So let’s just quote…”

O’Toole: “What it says is, it says that ‘she couldn’t even get from her own doctor, right, clarity about whether or not he could preform a procedure’ and it said that ‘there was a serious risk of a criminal conviction and imprisonment if an initial doctor’s opinion that abortion was an option was carried out’. Now surely.”

O’Toole: “That’s a matter of fact. It’s also a matter of fact that what the court found was that the Government couldn’t tell the court. Now this is the court’s own judgement. It said it couldn’t tell the court what lawful abortions are currently carried out in Ireland. And it said that there was no explanation why the existing constitutional right to an abortion – in the case where the mother’s life is threatened – had not been implemented to date right? So those are the facts.”

Mullen: “No you have presented correct information there. Now I wasn’t necessarily just..I certainly wasn’t having a go at you to be honest with you Fintan. I’m trying to illustrate that sometimes these issues are different from what they’re made out to be. What was actually found and it was actually misrepresented in the Irish Times – on the front page article today – was not that Ireland must legislate to give effect to the 1992 Supreme Court decision. What was actually found was that there was a breach of the privacy rights of the third applicant in this case because the absence of an effective legislative or regulatory mechanism that would allow the person to have their case determined to see whether they met the, the Irish current constitutional position. Now what that means is and a very significant issue when the expert group comes back to report will be to what extent they have looked at…”

O’Toole: “This is the expert group that the Government have set up to advise on how to proceed.”

Mullen: “Exactly. And very interesting to what extent have they understood and have they examined what international law we are dealing with. We are not dealing with, for example, a ruling by the Irish Supreme Court. We have a finding that a person’s European convention rights were not upheld and what we now have, we enter into now is the diplomatic and political process where Ireland engages with the committee of ministers of the Council of Europe to come up with the solution. Now just to give you an example. In the British Hearst case is an example of a case where the European Court of Human Rights found against Britain because of their general prohibition of prisoners in custody from being able to vote. Britain is consistently critiqued and refused to implement that decision. And not only that but the European Court of Human Rights has to some extent even taken on Britain’s argument. Because in a very recent decision involving Italy they have moved towards the right of the state to determine the matter. So people need to be very clear on this because there has been a tendancy in some quarters to somehow project this that ‘Ireland now has no choice but to bring in abortion’. Nothing could be further from the truth. Ireland now must give clarity and it should give clarity and that will involve, rightly in my view, giving clarity to anybody who might have any medical condition. Because one thing we can also be sure of is that Irish women, currently, get top-notch medical care in pregnancy. We are, under the 2010 UN figures, joint-first in the world in terms of low maternal mortality. Let’s not lose sight of that.”

O’Toole: “There were 17 judges I think on the European Court of Human Rights. They gave a very narrow judgement which was not a pro-choice judgement at all. It actually threw out a lot of the arguments that were being made. It was a very narrow judgement. And what it says was that there’s a real human being in the middle of this situation who was placed in the most appalling situation by the Irish State.”

Caroline Simons: “May I address you?”

O’Toole: “Let me just put the question out. If you would address it because what’s the situation of that woman? And of other women…

O’Toole: “Hold on, hold on a minute now. What’s the situation of that woman and other women like her who are, right now, in situations where they cannot be told by their own doctors what kind of medical procedure they can have to save their lives. This is one of the very few places in the world where that…”

Simons: “The question was asked of me and I’d like to answer it.”

O’Toole: “Do you want me to read that out again? That’s what the court found.”

Simons: “The court in fact looked at the situation and the decision that was actually made was there was a recognition of the fact that the Supreme Court had given a right to abortion in 1992 in circumstances where they said the mother’s life is at risk including by her own threat of suicide. And the court observed there was nothing in place to enable a woman to know when she fell within those parameters. And what they said is that there should be clarity on the issue. There is no, there is no compulsion on that judgement for us to legislate for abortion. And the thing Fintan that you are ignoring persistently, and persistently in your article where you talk about  “a lunatic fringe that would deny life-saving medical treatment to a pregnant woman if it results in the termination of the pregnancy”. I know of no such lunatic group in this country and I’d like you to name one.”

O’Toole: “I specifically said that the overwhelming majority of anti-abortion activists do not fall into that category so.”

Simons: “I accept that.”

O’Toole: “So don’t be misquoting that.”

Simons: “You said there’s a “lunatic fringe”. There’s no such.”

O’Toole: “There is a lunatic fringe.”

Mullen: Think of the Special Olympics a few years ago, Fintan. And how we celebrated the way we cherish vulnerable people. The people who we were rightly celebrating at that Special Olympics event are people who simply aren’t born anymore to any significant degree in the western world. There is a big values question at the heart of this debate. Who do we cherish? Do we include everybody in the human community. But, in doing so, you never. You must never lost sight either of the welfare of women or of the welfare of their unborn child.”