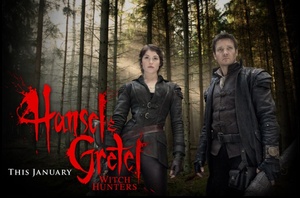 2. RENNER! J-Ren has three franchises in his pocket. He’s aiming for a fourth. Possible overstretching alert.

3. They shot this one ages ago, then postponed the release for nine months in the hope of cashing in on the success of The Avengers (2012) and The Bourne Whatsit (2012).

4. Who’s Gretel? It’s British actress Gemma Arterthon, who drowned in oil in Quantum Of Solace (2008). She stars in Neil Jordan’s new vampire movie, Byzantium (2012). And was born with six fingers on each hand. Seriously.

6. Who knew HAN-sel and Gretel were American. And why is everybody else European?

7. That said, the presence of Swedish character Peter Stormare is always a good thing. Where is pancakes house?

8. Remember Terry Gilliam’s The Brothers Grimm (2005)? Pretty poor. It had Stormare in it, too.