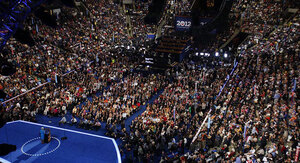 A day after the platform was published without the recognition of Jerusalem, the line was reinstated. Pressure had been building over not only the dropping of that statement – which was part of the Democratic party platform in 2008 – but also the removal of any reference to God in the document. Those omissions threatened to alienate both Jewish Democratic supporters and Christian swing voters. But the reintroduction of the lines was equally controversial; its clumsy handling resulting in a confusing vote and booing on the convention floor.

“Times Have Changed And So Have I”