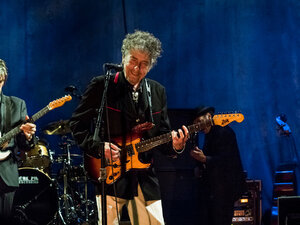 What’s wrong with us.

At the re-opening of the Capitol Theatre in New York last night.

Mr. Dylan, who has used the Capitol as a rehearsal space, was in a jovial mode, which is not to say that tidings of apocalypse were absent. Smiles broke through as he sang, and every so often he abandoned his instruments — piano, organ, electric guitar — to step forward as an unencumbered lead singer, sauntering downstage and gesturing with a cocked hip or a hand on his heart, for a little bit of old-fashioned show business.