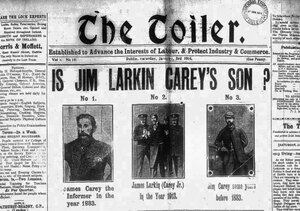 [Jim Larkin] was soon vilified by the employers of Dublin. In September 1913 they launched a newspaper called “The Toiler” which was described its aims “To advance the interest of labour & protect industry & commerce” Aimed at workers it attempted to undermine the Union. In the article above they stooped to a particular low by ludicrously accusing Larkin of being the son of James Carey. James Carey was one of the Phoenix Park murderers.
The ludicrous attempt to link Carey and Larkin needless to say had no basis whatsoever. Larkin was born in Liverpool while Carey lived in Dublin. While it may seem crass it was part on a huge campaign by Dublin employers to break the ITGWU. By 1914 Dublin’s workers began to drift back to work driven by desperate poverty and by the end of January 1914 the employers had won. Larkin for his part left Ireland emigrating to America.

Dirty Tricks in the 1913 Lockout (IrishHistoryPodcast)