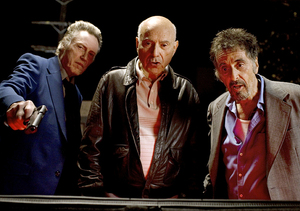 2. They should have called it ‘Auld Fellas.

3. Pacino and Walken were both in the infamous Gigli (2003), but they’ve never shared the screen before.

4. The trailer looks better than anticipated. We’re reminded of the Cassavetes/Falk flick Mikey And Nicky (1976).

5. Hey, Al’s been in a lot of toss over the years, but he can still bring it, as anyone who has seen You Don’t Know Jack (2010) will testify. He’s doing Glengarry Glen Ross on Broadway this winter (in the role Jack Lemmon played in the movie) and has a Phil Spector biopic in the can. Hoo-haa! Take that, Bobby De Niro!