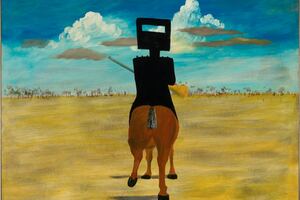 Sidney Nolan’s Ned Kelly series is “one of the greatest sequences of Australian paintings” of the 20th century and belonged to “the company of twentieth-century personages which includes Picasso’s minotaur,Chirico’s mannequins, Ernst’s birdmen, Bacon’s popes and Giacometti’s walking man”.

The National Gallery of Australia (NGA) is sending its Sidney Nolan Ned Kelly Series to a museum in Dublin.
The 26 works from the series will be loaned to the Irish Museum of Modern Art for exhibition from November to January.
The famous paintings tell the story of Ned Kelly and his gang from the shooting of police constables at Stringybark Creek, to the siege of the Glenrowan hotel and the trial which ended in a hanging sentence for Kelly.