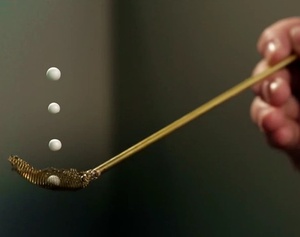 As part of their research into reducing the dose and increasing the effectiveness of pharmaceuticals, scientists at the U.S. Department of Energy’s (DOE) Argonne National Laboratory use a acoustic levitator – originally developed for NASA to simulate microgravity conditions.

The acoustic levitator uses two small speakers to generate sound waves at frequencies slightly above the audible range – roughly 22 kilohertz.When the top and bottom speakers are precisely aligned, they create two sets of sound waves that perfectly interfere with each other, setting up a phenomenon known as a standing wave.

At certain points along a standing wave, known as nodes, there is no net transfer of energy at all. Because the acoustic pressure from the sound waves is sufficient to cancel the effect of gravity, light objects are able to levitate when placed at the nodes.

What Is Up With Noises?

Do You Weigh Less If You Jump In A Lift?