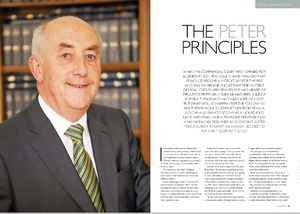 In a wide-ranging interview with ‘The Parchment’, the magazine of the Dublin Solicitor’s Bar Association (DSBA), Mr Justice [Peter] Kelly — head of the Commercial Court — said there should be an independent body to appoint judges.

The tough-talking judge, who has ruled out ever going to the Supreme Court, also claimed some people who would make excellent judges were “passed over” in favour of others who were not so well qualified.

“It’s purely political in any event, the appointments to that court, and I never had any politics…I always thought the ideal age for the bench was 50. I was 46 then, so I was some years short of that. On the other hand, in the absence of political involvement, was I ever going to get the opportunity again?”