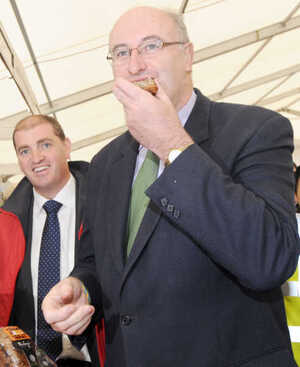 Phil Hogan at the ploughing championship [ government chief whip Paul Kehoe in background] in New Ross, Wexford, this morning, said he was entitled to make an intervention in the housing of a traveller family in his Kilkenny constituency.

And will not resign.

[Hogan] is likely to be the next Minister for the Environment, Heritage and Local Government. It’s a powerful gig, all the more so in the context of Hogan’s announcement earlier this month that he intends to shut down the Moriarty Tribunal when Fine Gael gets into government.

Phil Hogan And His One Point Plan (Broadsheet)

The Minister for the Environment has announced a dramatic reduction in the septic tank registration fee from €50 to €5 amid claims from opponents it was a clampdown and U-turn.

“He replied in a loud voice: ‘I have no problem screwing you. Hasn’t Mairtin been screwing you for years?’ Then he turned his back on me and said: ‘Business tomorrow,’ ” Ms [Ann] O’Connell, 70, said of the incident.

The minister met with Mr Lowry six days after the Moriarty report’s release in Mar 2011 and after calls by the Taoiseach for the TD to step down.

“He did briefly bump into Denis O’Brien. They bumped into each other and exchanged pleasantries. They spoke for a matter of moments,” a spokesperson said.

April 2012 The ‘Would U Ever Relax And Feed The Children’ Text.

The Kilkenny woman told how kids are going hungry as cash-strapped families scrimp to pay the hated 100 tax. But she was stunned when a reply from Hogan’s personal mobile said: “Would u ever relax. And feed the children.”

Enda To Probe Rude Text By Hogan (The irish Sun)

Mr Hogan, who has an apartment in Villamoura on the Algarve, has an outstanding service charge of €4,320, according to a ‘debtors’ list document

July 2012 The ‘Soft Loan’ from Nationwide

Hogan’s unorthodox loans were personally approved by Fingleton to allow him buy a pied-a-terre house in Dublin 4 and a luxurious penthouse in Portugal using two interest- only loans of at least a decade each, an aggressive equity release, and what appears to have been, for his final loan, minimal paperwork.