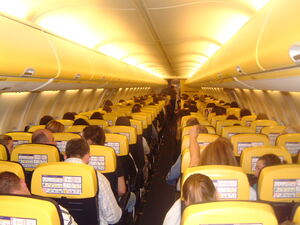 Not just cheap fares and gourmet catering so.

July 26, 2012
Ryanair made three emergency landings for its aircrafts in Spain, because of low fuel, on the same day. The planes’ pilots issued Mayday warnings on the three occasions.
The three planes had been diverted to Valencia because of thunderstorms over Madrid. However they were circling above Valencia for about an hour, due to heavy air traffic.

September 7, 2012
A Ryanair flight from Madrid to the Canary Islands is forced to make an emergency landing after losing cabin pressure.

September 16, 2012
A Ryanair flight going from Paris Beauvais to Tenerife lands in Madrid due to a “small technical problem”.

September 20, 2012
Following the above incidents, Ryanair is ordered to review its fuelling policy. The Irish Aviation Authority accepts all three planes left for the Spanish capital “with fuel in excess of Flight plan requirements”  and also with fuel “in excess of the minimum diversion fuel’ required, so remained strictly within the rules.
But it notea: “Diverting with fuel close to the minimum diversion fuel in the circumstances presented on the evening in question was likely to present challenges for the crew.”

September 24, 2012
A Ryanair flight from Standsted to Bratislava is forced to make an unscheduled landing in Berlin due to a technical fault.