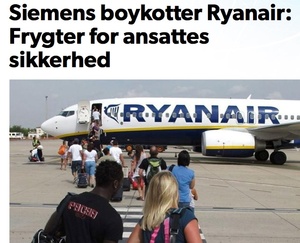 Siemens Boycott Ryanair: Fear For Safety Of Employees.
In recent months many negative stories about major security breach at
Ryanair will now have the German engineering giant Siemens to boycott
the airline.
In concrete terms, this means that none of the company’s 380,000
employees in 190 countries is allowed to use the airline if they are on a
business trip.
Siemens requires that it must be safe for our employees to fly with it
– therefore this boycott, says Communications Director Caroline
Rylander .
The decision to boycott comes from the the head office
in Germany, she says.
“It is primarily a decision taken by our employees’ safety in mind,
but we also want to send a signal to Ryanair to intervene so that we
can again rely on their safety,” said Rylander.
In recent months, Ryanair has received much bad press – among other
things, there have been reported cases of emergency landings because
aircraft did not have enough fuel – and recently a plane was ditched from
Ryanair in Billund Airport. [Translated from Danish]

Short Back, Front And Sides