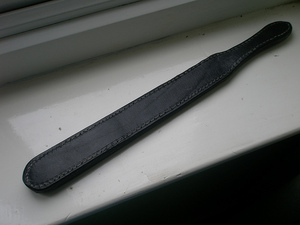 Yesterday we featured the forthcoming celebrations [to be attended by Mary McAleese] to mark the 250th anniversary of the birth of Edmund Ignatius Rice, founder of the Christian Brothers order.

The item brought back a few memories:

“I attended O’Connell’s CBS during the Seventies. I and my fellow students had the crap beaten out of us on a regular basis by these “christian” brothers. I recall many fellow students being beaten with a leather strap with bits of lead sewn into it or with a half inch thick wooden stick. These were not isolated incidents, but a pattern of behavior which persisted for decade.” (Realpolithick)

“Every day for no good reason, Any excuse to beat up a child. It started on our first day and continued until we were big enough to defend ourselves. It was institutional violence and the lay teachers were actively encouraged to join in. Some of the lay teachers became worse bullies than the Brothers.” (Bacchus)

“A guy in my year was singled out for being born in England by one Christian Brother…that was weird (around 1989).” (Johnner)

“My first day at this new school, the Headmaster, a vicious little thug, stood me up before the whole class and asked me question after question which I couldn’t answer (different curriculum). He then, from that day onwards, found ways to abuse me physically and emotionally; no fiddling but a lot of the strap. Also my accent came in for constant ridicule, from staff and boys alike.” (Mcp)

“Three of the brothers from my school have since been done for sexually assaulting students in the school. One is currently pending trial for 170 or so counts of abuse in another school….As for the general attitude of arrogance that wafted from both the brothers and the lay teachers that worked under them. I can only hope the Irish Naval vessel currently stationed outside the Convention Centre  [Dublin] shells it on Saturday while this [anniverary celebration] is on.” (Wayne F)

“Only day I was ever relatively happy was my second to last day at primary, as per usual I got a beating for not joining in the prayers. Went home for lunch. Told my mum. She just shrugged her shoulders. I returned to school after lunch. I was in the science class with a certian evil Limerick scumbag. There was a knock on the door, and seconds later that sadistic man was out cold on the floor. By my dad. ” (Kevin Maher)

“I too went to a Christian Brothers school, but fortunately it was more recently, in the 90′s and I was not subjected to corporal punishment. There was still a mentality that children were scum, teachers were distant and punishments were severe, but nothing physical.” (Munkifisht)

I went to CBS schools in the 60s and 70s. I found that there were far more decent caring brothers than thugs. There was a couple of sadistic bstards but the majority were ok.The system was far from perfect but it was the only show in town.My only complaint is that we were educated to serve rather than to lead. (Miles O’Tool)

“Yes, I went through the meat grinder that was a C.B.S. education in the ’60s and ’70s, when corporal punishment was all the rage and the Christian Brothers were supplied with a standard issue ‘leather’, a mass produced seven or eight inch length of leather that had old pennies sewn into their several layers. ‘Six of the best’ on each outstretched hand would have you numb for ten or fifteen minutes before the excruciating pain kicked in. This is to say nothing of the Christian Brothers who liked to inflict more inventive tortures involving rulers, chalk, canes, and their bare hands. Luckily, I arrived into the system a mere year or two after they had stopped forcing left-handed boys to use their right hands for schoolwork. Anyway, as I say to my two daughters, who stare at me in disbelief when I relate this approach to education, it never did me any harm (he says with a nervous tic).” (John Kenny)