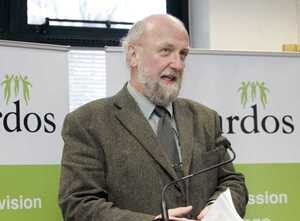 Fergus Finlay on the “extraordinary decision of Eddie Hobbs to use the Wall Street Journal to undermine his own Government”.

Hobbs, described in the WSJ as a financial writer, finished his diatribe this way: “So, while Time magazine and others eulogize the plucky leader of the Irish people, the truth is that Enda Kenny leads a Vichy government — captive externally to creditors that still insist on loading bank debt onto the sovereign, and internally to a tribe of insiders led by union godfathers in a deal that protects the Government’s own excessive pay and pensions…”
Truth? Someone who uses a term like that to describe his own country doesn’t know the meaning of truth.
“The deliberate comparison of our Government — successful or not —to Vichy is disgusting.
So, that’s what I’ve learned these past few days. On our streets, there are thousands of people who are struggling, but are decent. They deserve enormous respect. And then there are a few who are comfortable and self-important. And deserve no respect whatever.

And then irony died.

The Decent People At the Bottom Will Save Us, Not The Indecent At Top (Fergus Finley, Irish Examiner)

Won’t Somebody Please Think Of The Salaries

Also: Finlay: RTÉ’s Future Is Safe In The Hands Of Honest And Skilled Tom Savage

Fergus Finlay: A Nation Turns Its Lonely Eyes To You