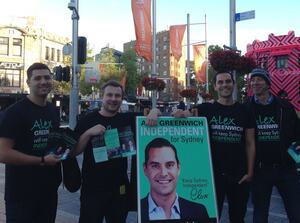 I emigrated to Australia from Ireland over 15 years ago, before it was fashionable and all (!). I am currently involved in a by-election for the State Seat of Sydney, NSW Australia.
The front-runner in the election is one Alex Greenwich (he’s second right in the photo above), who has been heavily involved in the Australian Marriage Equality campaign for the last 5 years.
There is currently no marriage equality in Australia and this necessitated Alex having to marry his same-sex partner overseas. If Alex wins he will become the first member of the NSW parliament in a same-sex marriage.
His website is at AlexGreenwich.com The election is in less than 24 hours so we would love a shout-out if possible.

Be Careful Out There

‘Who Would YOU Gay Marry?’

Flavour Of The Month