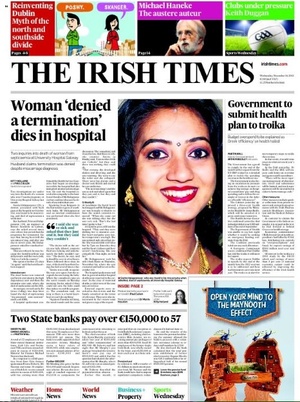 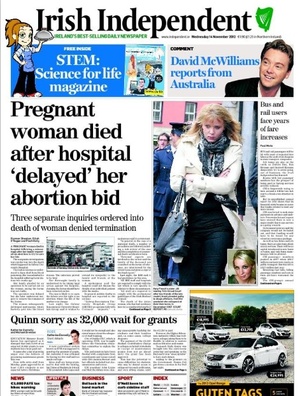 Two Investigations Into Death Of Woman After Galway Miscarriage (RTE)

Savita Halappanavar, who was 17 weeks pregnant, died of septicaemia a week after presenting with back pain on 21 October at University hospital in Galway, where she was found to be miscarrying.
After the 31-year-old dentist was told that she was miscarrying, her husband reportedly said that she had asked for a medical termination a number of times over a three day period, during which she was in severe pain.
But he said these requests were denied because a foetal heartbeat was still present and they were told at one point: “This is a Catholic country.”
Medical staff removed the dead foetus days later after the heartbeat stopped but Halappanavar died of septicaemia on 28 October.

Leave Your Choice At Check-In

‘The Choice Is Yours’