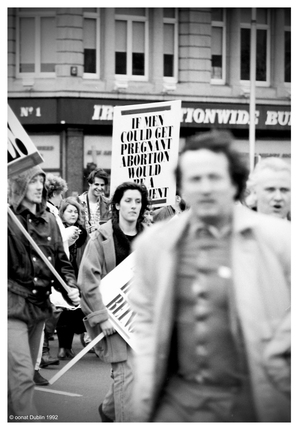 I found these negatives in a pile of college notes last week and scanned them. Given the current re-visit to the abortion legislation in Ireland, I thought you might be interested to see that protests on the streets have been going on for some time. This one, in O’Connell Street in 1992, was against the ban on the provision of information on abortion services outside the State; it was in reaction to the X-case, plus it was in defiance of the Eighth Amendment of The Constitution.

The Thirteenth Amendment and the  Fourteenth Amendment (both in 1992), most likely reacted to the X-case and not this protest. The amendments changed the information ban, by guaranteeing a pregnant woman’s right to freedom of travel and to information about abortion services available abroad respectively.
A case, not a protest it seems,  will prompt the legislators.