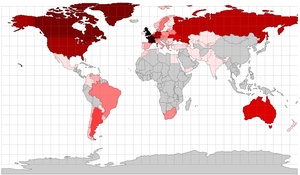 I thought this may be of interest considering all the coverage of the fighting in Israel / Palestine over the past couple of weeks.

It is often said that Ireland or the Irish are anti-semitic. Something I have never believed. And now we have some proper research from the Stephen Roth Institute for the Study of Contemporary Antisemitism and Racism, Tel-Aviv University Their data has been put into a choropleth map by a Evangelos Kapros of TCD. More on him here

Anyway, according to this map there has been 1 incident in Ireland per 2.4m individuals between 2001 and 2010.

I think that should put an end to any nonsense of this island being called antisemitic for good. The next time someone speaks out for Palestine, it is more likely a show of solidarity for an oppressed people than any type of antisemitism.