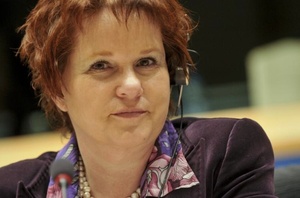 Meanwhile, UK MEP Sharon Bowles (above)  has said that Ireland has got a ‘raw deal’ in its bailout, compared to the agreement struck in Europe last night on the Greek debt crisis.
European Parliament’s Economic and Monetary Affairs Committee chair said “morally” something had to be done for Ireland.
Speaking on RTÉ’s Morning Ireland, she said the most obvious way was to do a deal on the promissory note, the means by which Anglo Irish Bank was funded.
…UCD Professor of Economics Karl Whelan, said the deal for Greece was in “stark contrast” to the “pretty unseemly haste” with which Ireland is being forced to repay the promissory note for Anglo Irish Bank.
Professor Whelan said Greece is becoming a model of how the EU is becoming more flexible in how it deals with debt of unsustainable levels.