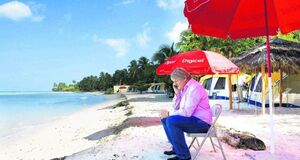 Rating agency Fitch is expressing the view that Caribbean telecoms giant Digicel may be unable to repay debt due this year, even as it gets a 30-day grace period for interest payments on US$2.9 billion worth of debt.

Expressing the view that, “this debt is not expected to be repaid”, Fitch points out that the default will stem from heightened uncertainty related to the novel coronavirus disease (COVID-19) pandemic.

Businessman Denis O’Brien’s heavily indebted Digicel revealed on Thursday that it is looking for creditors to write off $1.7 billion (€1.55 billion) of what they are owed, as the phone group has been left with an unsustainable debt file following years of earnings decline.

The move would reduce Digicel’s total debt by almost 25 per cent from $7 billion currently. 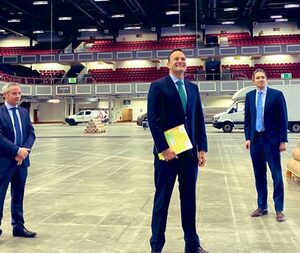 Previously: A Step Down Warm-hearted, curtain-twitching coverage in the Irish Times (top) and the Irish Independent of the aftermath of the attempted eviction of a farmer and two siblings from their home in Strokestown, County Roscommon. It was about an item on Today with Seán O’Rourke, in which journalist Brian O’Connell reported on repossession cases that were heard last Wednesday at Cork Circuit Court.

On that day, there were 52 cases before the court involving a family home.

Today, there are 40 such cases listed in the Cork Circuit Court – also all involving a family home.

Specifically, on Wednesday, Mr O’Connell spoke to a mother of five in Cork who appeared in court without the knowledge of her family.

The woman’s house is back in positive equity, and it was reported that her debt amounts to around €30,000.

She was just after receiving an adjournment until May when Mr O’Connell spoke to her.

“I don’t have Christmas decorations up, I don’t have any Christmas shopping done, I actually, I love Christmas, but I can’t think. You don’t think about anything else, when this is going on.”

“My youngest, the other day, he wanted change for a collection for Focus and he said, ‘Mum, at least we’ll help some homeless person’ and I’m actually thinking ‘that could be you’. And it’s so tough and it’s so hard…”

“I can feel my whole body crumbling. I’m so tired, so weary all the time. I’d give anything just to sleep, sleep, just to actually not be thinking constantly, not be worrying constantly.”

Mr O’Connell spoke to the woman last night – after she received a call from an unidentified woman who said they wanted to pay €10,000 towards her arrears.

Mr O’Connell said, in total, some €15,000 in donations have been made to the woman in the past two days.

“I cannot believe the reaction to this. I have just spoken to a woman who wants to pay off some of the arrears on my account. A substantial amount of the arrears. What amazes me is people’s generosity. But the thing is, going through all of this, you feel so worthless. I actually feel quite bubbling inside at the moment.”

“I feel, I’ve got a chance, I actually have got  a chance for the first time in years but now I’m crying again and I, but for a totally different reason. I don’t want to name the woman, in case she doesn’t want to be known but she knows we’ve just been speaking. Thank you so much, thank you and please, please know that what you have done is just I feel I can walk a little taller again.”

Previously: ‘I’d Give Anything Just To Sleep…To Not Be Thinking Constantly, Not Be Worrying’ Moments ago Bloomberg blasted a headline which has to be validated by other members of the European Commission as well as Merkel and the other Germans (and may well be refuted, considering this is Europe), which said that:Commission To propose Six Month Exension – sources So did Greece just win the first round of its stand off with Brussels? It remains to be confirmed, but congratulations to Greece if indeed it caused Merkel and the ECB to fold….

After Greece Warns It May Get Funds From Russia Or China, Europe Said To Propose 6 Month Extension (ZeroHedge) Look! Ireland is a world leader in something! Pity it’s debt levels, nice statistics that show how Ireland’s debt problem has ballooned since 2007, I prepared this map based on an MGI report on global debt levels released [yesterday]. Read more here and here.

An ever increasing mountain of global debt? (Omar Sarhan) Enda Kenny goes to Brussels today to meet European leaders . He is “not expected to use the meetings to plead for Irish debt renegotiation” despite this being the perfect time and opportunity.

But he is “expected to strongly defend Ireland’s corporate tax regime at a meeting with Mr [Jean Claude] Juncker”.  Good times.

Earlier: Making A Drachma Out Of A Crisis In response to a call Catherine Murphy, TD calling for support for a European Debt Conference.

Of course, this data [above]only goes so far.  There are a number of other factors that determine sustainability – the level of foreign borrowings, exports, current account surplus, high-tech employment and activity.  A high-income country can sustain a high debt level that a low-income country couldn’t.  But at the gross level, we can see that Ireland is a highly indebted country and, within that, carrying the highest level of illegitimate private banking debt.

….So let’s bottom-line this. We are highly indebted with high levels of interest payments. The Government intends to run substantial surpluses to meet those interest payments. At the same time, we are facing into a slew of problems – not least of which is a chronic investment crisis and a massive repair job to a social infrastructure which was pretty anaemic prior to the recession, never mind now. A growing elderly demographic, household debt, continuing high levels of emigration and a deprivation rate of 30 percent: and we intend to run up a surplus of nearly €9 billion in a few years…

Debt? What Debt? (Michael Taft, Notes On The Front)

Who, in other words, gets the best deal from its international lenders, good Ireland or bad Greece? There’s no contest. Last year, Greece paid €8 billion to service debts of €315 billion. Last year too, Ireland paid €7.5 billion to service debts of €214 billion. So it cost us almost as much to service €100 billion less. Why? Well at least in part because, even before Syriza took office, the Greeks didn’t go around telling everyone that their debt is “affordable and repayable”.