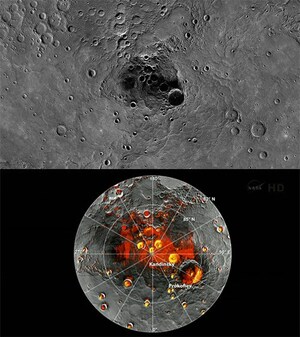 Given its proximity to the Sun, Mercury would seem to be an unlikely place to find ice. But the tilt of Mercury’s rotational axis is almost zero — less than one degree — so there are pockets at the planet’s poles that never see sunlight. Scientists suggested decades ago that there might be water ice and other frozen volatiles trapped at Mercury’s poles.
Now the newest data from MESSENGER strongly indicate that water ice is the major constituent of Mercury’s north polar deposits, that ice is exposed at the surface in the coldest of those deposits, but that the ice is buried beneath an unusually dark material across most of the deposits, areas where temperatures are a bit too warm for ice to be stable at the surface itself.

Ah, cool refreshing Mercury water. Just the thing after a day toiling on the terrafarm in the 700K heat.