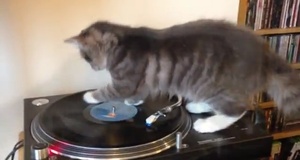 This day last week I hurriedly posted a video of my cat to YouTube in order to share with my friends on Facebook.
I went out to work that afternoon and my phone never stopped buzzing with emails all night. It was only then that I realised it had gone viral.
A week later, I now have a theory that this could be the most viral Irish video ever…. (as in fastest growing, not most views). The closest I can come up with is The Rubberbandits’ Horse Outside video which received 530,000 views in 72 hours…. In 72 hours, my video received 1,018,445.
It is currently getting over 10,000 views an hour.
At the time of writing the view count is 1,949,000. I’m still in shock. I’m sure there might be others though that I’ve overlooked?