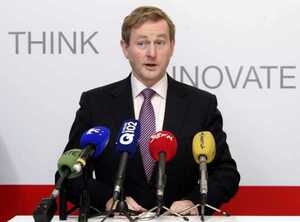 The point is that much of what the Taoiseach had to say was inarticulate drivel and all of it was waffle.

He was starting sentences without knowing where they were going to end. He was using random verbs with no relationship to their objects. (In what language can “progress” be “put” or “grown on”?)

He was making claims, such as low interest rates being a sign of Irish confidence, that it is terrifying to think he might actually believe. He was half speak-your-weight machine, half Alan Partridge.